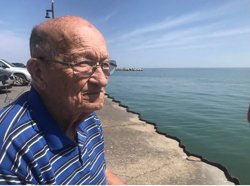 Please share a memory of Clarence to include in a keepsake book for family and friends.
View Tribute Book

Clarence E. “Ed” Troutner, 92, of Westfield, NY passed away Friday morning, January 8, 2021 at Absolut Care of Westfield. He was born in Little Cooley, Pa on January 25, 1928, the son of the late Paul and Madelyn (Hutchison) Troutner. He attended New Richmond elementary and high school, he also volunteered in the US Army-Air Corp in 1945, preceding the end of WWII. He was stationed at Yokota and Osaka airbases in Japan, after the war’s end, as a navigator and radio operator on the B-29 aircraft for the Fifth Air Force.

After meeting his future wife Lois Gail Lang at a square dance, they courted and got married on April 28, 1951 in Teepleville, Pa. They were married for 47 years until her passing on January 4, 1998.

He worked at Talon, Inc. in Meadville, Pa. for over 20 years, starting as a machine operator and eventually becoming a line foreman. He relocated to Westfield, NY during the 1960’s and worked with his brother Paul Troutner until his passing. They were partners in a small appliance repair business as serviceman. In the mid 1960’s he took a job with the Westfield Electric Department as a radio operator and dispatcher. Eventually, he became the township electric line supervisor.

After retiring from the village around 1988, he worked a short time with Growers Co-op as a tow motor driver. He also worked at the Barcelona Harbor, Daniel Reed Pier as the Harbormaster for about 10 years.

He was an avid fisherman, hunter, and a lifetime member of the Westfield Fish and Game Club.

Friends may call at the Mason Funeral Home 37 Clinton St. Westfield on Wednesday, January 13, 2021 from 11- 1PM. Burial will be made in the Roselawn Memorial Gardens, Meadville, PA.

Memorial contributions in Ed’s honor may be made to the Patterson Library, 40 S. Portage St. Westfield, NY 14787.

To share a condolence or a remembrance with Ed’s family go to www.masonfuneral.com.

To send flowers to the family or plant a tree in memory of Clarence Troutner, please visit Tribute Store
Print
Wednesday
13
January