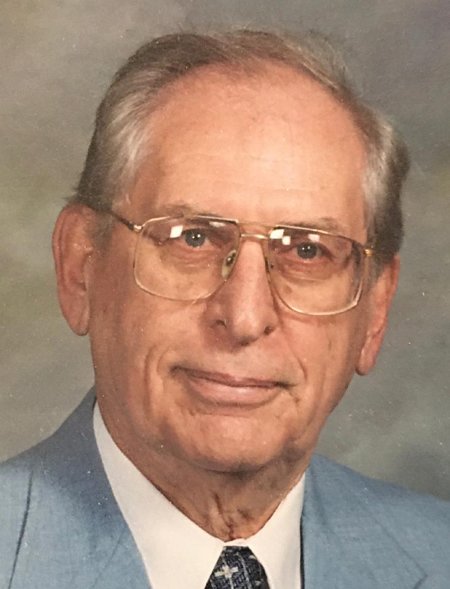 Gordy was born on January 13, 1923, in Erie, Pennsylvania, the son of the late Walter W. and Emily (Metzner) Roemer.

He was a 1941 graduate of Academy High School and enlisted in the US Army during WW II, proudly serving from 1943 to 1945 attaining the rank of Corporal.  While in the Service, he met the love of his life, Ruby Neil Stevens, and they were married on December 24, 1943 in Bennettsville, SC prior to his deployment to the European theater, with the 435th Troop Carrier Group. Sadly, Ruby Neil died on July 20, 1997.

Gordon was a longtime member of Lakewood United Methodist Church and enjoyed participating in the Men's Bible Study group.  He had been employed as a Dispatcher for the former General Electric Corp of Erie from 1941 until 1955 when he joined the corporate offices of the former Parker White Metal Co. in Fairview, Pa, where he retired from as Director of Purchasing and Trafficking in 1988. Gordy was a life member of Perry Keystone Lodge #392 F & AM, a longtime member of the Zem Zem Shrine and past Director of the Director's Staff. He had also participated in and belonged to numerous other Shrine and Masonic organizations.  Gordy was an accomplished and avid golfer who played in several leagues at Over Lake Golf Course in Girard.

Survivors include his son and caregiver, John Gordon Roemer, Jr., with whom he made his home, as well as his other son, William J. Roemer of Durham NC, and his 2 daughters, Jacqueline (Gregg) Wilkinson of Willow Park TX and Deborah C. (Scott) Mason of Westfield NY. Several grandchildren, many great grandchildren and his dear and special girlfriend, Virginia Ditch of Erie also survive.

In addition to his parents and his wife of 55 years, Ruby Neil (Stevens) Roemer, Gordon was preceded in death by his brother, Robert H. Roemer and his sister Helen Ruth Roemer.

Due to current restrictions on social gatherings, all services will be private.

Interment will be in Laurel Hill Cemetery with Rev. Robert H. Lewis officiating.

Funeral arrangements have been entrusted to the MASON Funeral Home of Westfield, NY and to the Carl A. Slomski and Son Funeral Home, Inc., 2101 Ash St., Erie, PA.

Log on to www.masonfuneral.com to send the Roemer family a message of sympathy, to light a Memorial Candle or for further information.

To send flowers to the family or plant a tree in memory of John Roemer, please visit Tribute Store
Services for John Roemer
There are no events scheduled. You can still show your support by sending flowers directly to the family, or planting a memorial tree in memory of John Roemer.
Visit the Tribute Store
Share Your Memory of
John
Upload Your Memory View All Memories
Be the first to upload a memory!
Share A Memory
Send Flowers