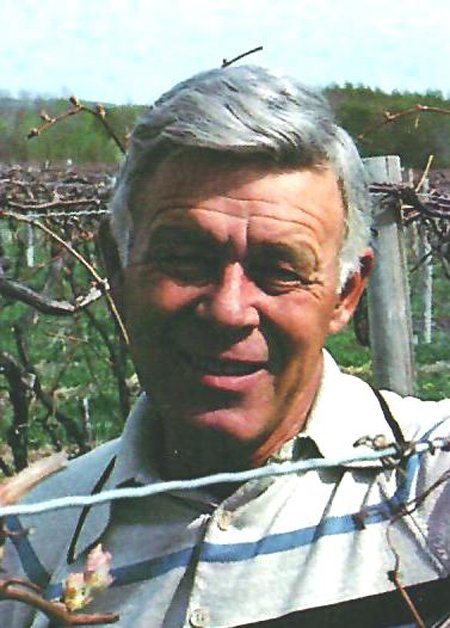 Please share a memory of Trenholm to include in a keepsake book for family and friends.
View Tribute Book

PORTLAND -Trenholm Douglas Jordan was born February 28, 1927, in Bath, New Hampshire, to Clyde Wilson Jordan and Lillian Hutchins Jordan. He passed away February 15, 2020, just shy of his 93rd birthday. Farming was his life, from birth on his grandparent’s dairy farm in New Hampshire’s north country, to death on a grape farm in western New York.

In 1943 Trenholm entered the University of New Hampshire in a special World War II program designed to teach high school-age men the skills of farming, to maintain family farms while older men were at war. At UNH he met Mary Williams, who became his wife of almost 75 years. After serving in the Navy, he completed in 1950 a bachelor’s degree in horticulture at UNH. Tren and Mary moved in 1951 to Brocton, New York, and then soon after to a farm in Portland. Between 1950 and 1957 four children were born, Nancy, Teresa, T. Douglas, Jr., and Michael.

For 31 years, Tren was an employee of Cornell University’s State College of Agriculture and Life Sciences, working as an agricultural extension agent in Chautauqua County, specializing in fruit crops. He served both local fruit farmers and agricultural researchers at the university. He organized a viticulture and engineering team that invented the world’s first mechanical grape harvester. Similarly, he participated in development of chemical weed sprays for grapes that reduced or eliminated root damage, and successfully increased grape yields. In 2011 the Lake Erie Regional Grape Program Advisory Committee recognized his numerous contributions with a Special Recognition Award.

In 1962-63 Tren temporarily moved his young family to Davis, California, while he completed a Masters Degree in viticulture. Even with 4 young children, he greatly enjoyed seeing national parks and historical sites. Later, with the children older, he and Mary enjoyed international and national travel, largely for the grape profession field trips and conferences and then later to see more of the world.

In 1982 Tren retired from Cornell to dedicate himself to the Jordan’s Portland grape farm, with son Michael. Although the farm had only 15 acres of grapes when bought in 1954, beginning in 1979 it grew into a full business, with expansion into wine grape varieties, cherries, and asparagus. Progressively over the next decades, Tren also retired from farming. However, he remained a highly motivated flower and vegetable gardener through the summer of 2019.

He was a successful golfer, and for the last 20 years of life he and Mary spent the winter months on Jekyll Island in Georgia, surrounded by golf-loving companions. His love of winters on Jekyll Island kept him there until the week before his death.

Trenholm Jordan was predeceased by his parents and brother Clyde, and son Douglas. He is survived by his wife Mary, his brothers Gerald (Bettie) Jordan, Arnold (Mariann) Jordan, and his children Nancy (James) Schuster of Westfield, Teresa (Richard Allmendinger) Jordan of Ithaca, and Michael (Marion) Jordan of Portland. Nine grandchildren and their spouses also survive him, most of whom live near enough that they remain frequent companions of Tren and Mary: Sarah Schuster Ruben (Joshua), Scott Schuster, Amy Begier (William), Brent Schuster, Bryan Jordan (Jamie), Kristopher Kane (Nicki), Vincent Kane, Bailey Jordan, and C.J. Allmendinger. He is also survived by 15 great-grandchildren and many nieces and nephews. He adored his grandchildren and great grandchildren. With the recent marriage of the first great grandchild, he was looking forward to another generation.
Friends may call at the MASON Funeral Home, 37 Clinton St., Westfield, NY on Thursday, February 20, 2020 from 4:00 PM - 6:00 PM and are invited to attend the Funeral Service on Friday, February 21, 2020 at 11 AM at the First United Methodist Church of Westfield, 101 E. Main St., Westfield, NY. Burial will be in Portland Evergreen Cemetery.
Memorials may be made to the First United Methodist Church of Westfield, 101 E. Main St., or to the Westfield Memorial Hospital Foundation, 189 E. Main St., both in Westfield, NY 14787.

Log on to www.masonfuneral.com to send the Jordan family a message of sympathy, to light a Memorial Candle or for further information.

To send flowers to the family or plant a tree in memory of Trenholm Jordan, Sr., please visit Tribute Store
Thursday
20
February

Look inside to read what others have shared
Family and friends are coming together online to create a special keepsake. Every memory left on the online obituary will be automatically included in this book.
View Tribute Book
Share Your Memory of
Trenholm
Upload Your Memory View All Memories
Be the first to upload a memory!
Share A Memory
Send Flowers