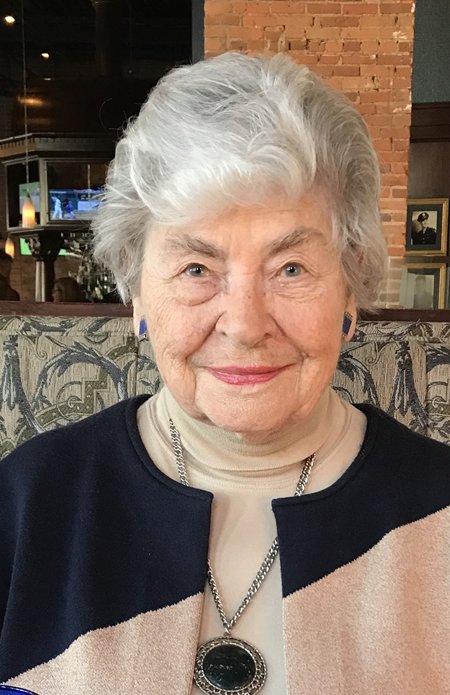 Please share a memory of Jean to include in a keepsake book for family and friends.
View Tribute Book

Jean Bailey Gaede, age 91 of Cleveland Ohio passed away on August 13th while vacationing at her cherished summer home in Chautauqua New York.

Loving mother of Gretchen Gaede and Carl (Susan) Gaede, dearest grandmother of Julia and Reid Gaede, and beloved sister of James M. (deceased) and John T. Bailey.  She was preceded in death by her husband, architect, Robert Curtis Gaede.

Jean was born on April 1, 1928, the daughter of the late Theodore L. and Helen Moyle Bailey. She graduated from Shaker Heights High School and Bucknell University where she majored in English and Poly Sci. She did her graduate studies in Cleveland obtaining her Teachers Certificate in Art. Her first job was in New York City as a production manager for “Newsweek Magazine,” thus began a lifelong interest in journalism and writing.

She married Cleveland architect Robert C. Gaede in 1954 and had two children, Gretchen and Carl. Jean immersed herself in civic involvement and was an outspoken champion for many causes and organizations. Along with serving on countless boards she was elected President of many of the organizations on which she served including the Cleveland League of Women Voters, The Lomond School PTA, the Shaker Heights High School PTA, the Shaker Square Merchant’s Association, the Greater Cleveland YWCA and the Women’s City Club of Cleveland. She was instrumental in establishing the Women Celebrating the Bicentennial of Cleveland and won numerous awards including the Elsa Pavlik Award from the Women’s City Club and the YWCA Women of Achievement Award for the Greater Cleveland.

Despite all of her work outside of the home she remained a devoted mother and wife, still finding time to indulge in her passion of art, producing stunning paintings and sketches and meticulous needlepoints right up to her passing. She felt the need to do something creative every day of her life in order to feel fulfilled. She wrote from the heart and belonged to a writing class and poetry class in Cleveland where she produced volumes of work. Being the family historian she authored two books based on the family, “Ancestral Anthologies” and “Yankee Convictions” - the Life and Times of Henry Turner Bailey, her grandfather and first Dean of the Cleveland School of Art (now Cleveland Institute of Art.)

The family roots at Chautauqua Institution span five generations. Her mother, Helen ran HMB Gift Shop at the Colonnade Building till 1952, her daughter; Gretchen opened her Gallery, Gretchen’s Gallery in 2011 in almost the identical spot. Her grandfather designed the Arts and Crafts Quadrangle Building and was a popular lecturer at the Amphitheater in the early 1900’s. Her husband, Bob’s architectural firm did the restoration of the Hotel Athenaeum in 1989. Chautauqua is still an important gathering place for extended family. She grew up with brothers Jack and Jim in the same cottage in which she then raised her children. Jean had a host of enthralling stories about Chautauqua that she would eagerly share with anyone who would listen. Her “happy place” was on her cottage porch in her rocking chair with a cup of coffee and book in hand gazing out at her lovely yard and garden. She enjoyed that up to and including on the day of her passing. Jean had a boundless curiosity, and was a voracious reader with a great interest in current events and a desire to learn something new each day. She loved dialogue and good hearted debate. She served as a mentor to many and her graciousness of spirit resonated with all she encountered.

Funeral services will be held Thursday August 22nd at 4 PM in The Hurlbut Memorial Church, Pratt at Scott, Chautauqua, NY, with a private Celebration of Life Ceremony to follow.  Burial will be private in Chautauqua Cemetery.

Funeral arrangements have been entrusted to the MASON Funeral Home, 37 Clinton St., Westfield, NY 14787.  Log on to www.masonfuneral.com to send the Gaede family a message of sympathy, to light a Memorial Candle or for further information.

To send flowers to the family or plant a tree in memory of Jean Gaede, please visit Tribute Store
Thursday
22
August