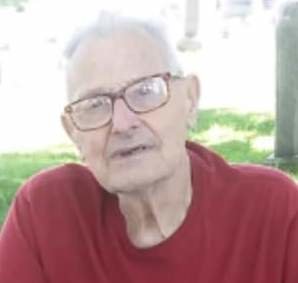 Robert was born on April 4, 1926, in Westfield, New York, the son of the late L. Darwin and  Alberta (Fowler) Breads.

Robert received his High School Diploma from Westfield Academy and Central School. He served in the US Navy from 1944 to 1946 during World War II as an Electricians Mate.  He had been a Dairy Farmer in Volusia for many years and retired after 30 plus years at Renold Inc. as a machinist.

Bob had been an active member of the First United Methodist Church of Westfield, where he served on the Board of Trustees and was a Trustee Emeritus. He had been active in many of the Church's activities and from time to time spent many hours assisting with the maintenance of the building and grounds. Bob's hobbies included woodworking and carpentry, and he possessed the skills of a general handyman. Bob enjoyed helping others with projects around their houses and was always willing to lend a helping hand.  He was a member of the Volusia Cemetery Board, the Loyal Order of Moose #118 and the Wm. P. Jackway VFW Post 6764 all in Westfield. However, Bob's main love was for his family.  He was a devoted husband, loving father and proud grandfather, great grandfather and great great grandfather.

Survivors include his 2 sons, Jeffrey (Sue) Breads of Westfield and Ronald (Cindy) Breads of Portland, NY, and his 1 daughter, Karen (late Jaime) Botteron and his daughter in law Constance (late Bruce) Breads both of Westfield,

He was preceded in death by his wife of 68 years, Marjorie (Jackson) Breads, who passed away on Oct. 30, 2016, and by his sons, Gary and Bruce Breads, his step-mother Ruby (Franklin) Breads, his brothers, Lee Harvey, Donald, Richard and Peter Breads and by his sister, Doris McNallie.

Friends may call from 11:00 AM - 1:00 PM on Thursday, April 25, 2019 at the MASON Funeral Home, 37 Clinton St., Westfield, NY and are invited to attend the Funeral Service there at 1:00 PM (immediately following calling hours) with Rev. Nicholas Perry officiating. Burial with Military Honors will be in Union Cemetery, Westfield.

Memorial Contributions in Robert's name may be made to The First United Methodist Church of Westfield, 101 East Main St., Westfield, NY.

Log on to www.masonfuneral.com to send the Breads family a message of sympathy, to light a Memorial Candle or for further information.

To send flowers to the family or plant a tree in memory of Robert Breads, please visit Tribute Store
Thursday
25
April