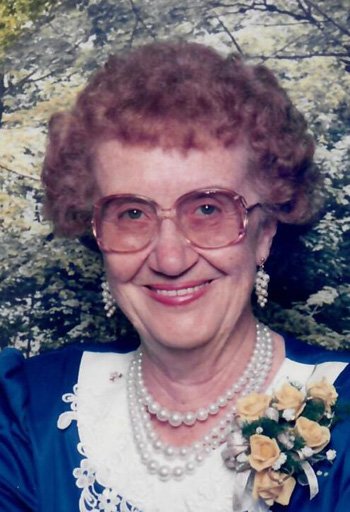 Please share a memory of Gloria to include in a keepsake book for family and friends.
View Tribute Book

Gloria was born on April 4, 1930 in Westfield, the daughter of the late Paul andFlorence (Graf) Eggert.

A Westfield area resident most all her life, Gloria was a 1947 graduate of Westfield Academy and Central School and had been a 71 year member of the First Presbyterian Church of Westfield where she had served her chuch on the Board Of Deaconess. Active in her community, Gloria was a Life Member of the Chautauqua Lake Memorial Post 8647 VFW Auxillary, had been a member of and past secretary of the former Westfield Grange and a member of the former Ripley Grange.  She was also a member and past secretary of the Westfield Senior Citizens and had been an Elections Inspector for the Westfield voting districts. She and her husband, Ralph ran Wakeley's Wishing Well Fruit Farms, specializing in Tree Fruit and Grapes.  They retired in 1997.

She is survived by her husband of 70 years, Ralph A.Wakeley, whom she married on August 30, 1948 in Forestville, NY and by her children, Howard Wakeley of Westfield, Bonita (Norm) Smith of Dewittville, Daniel (Nancy) Wakeley of Raleigh, NC, Laura (Bob) Bohall and Linda (Walley) Haley both of Westfield. 11 Grandchildren, 19 Great grandchidlren and 1 great great grandson also survive, as well as nieces nephews and cousins.

She was preceded in death by her 3 brothers, Franklin and Howard and infant Alvin Eggert and by her grandson, Jason Rupczyk.

Gloria's wishes were for all services to be private.

Log on www.masonfuneral.com to send the Wakeley family a message of sympathy, to light a Memorial Candle or for further information.

To send flowers to the family or plant a tree in memory of Gloria Wakeley, please visit Tribute Store

All Services will be private. A Memorial Service may be announced at a future date.
Online Memory & Photo Sharing Event
Online Event
About this Event

Look inside to read what others have shared
Family and friends are coming together online to create a special keepsake. Every memory left on the online obituary will be automatically included in this book.
View Tribute Book
Share Your Memory of
Gloria
Upload Your Memory View All Memories
Be the first to upload a memory!
Share A Memory
Send Flowers