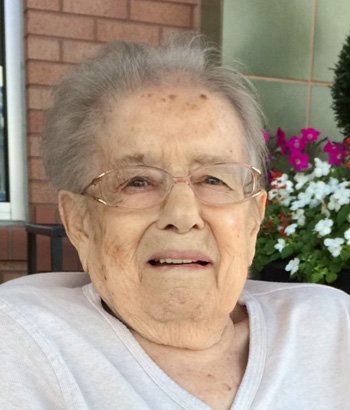 Obituary of Erma A. Leamer

Please share a memory of Erma to include in a keepsake book for family and friends.
View Tribute Book

CLYMER - Erma Leamer Aged 94 years passed away as a result of complications of Lewy Body dementia On October 20, 2018. Erma was born September 29, 1924 in Cleveland, Ohio a daughter of the late Frank and Erma (Thomas) Tieber.

Erma’s family moved to North East, Pennsylvania and she graduated from North East High School in 1942. After graduation she attended Erie Business College.

Erma was active in the war effort being a “Rosie the Riveter” building P-40 Warhawk fighter planes at Curtiss-Wright in Buffalo, New York. After the war, she eloped with Harold Leamer to Bradenton, Florida and was married on August 23, 1953. They made their home in Ripley, New York.

Erma was the bookkeeper, parts chaser, and light holder for Leamer and Frank’s Trucking Company and later their small engine repair shop. Erma also worked out of the home as a bookkeeper for Larry’s Truck Stop in North East, Pennsylvania until it was sold. She continued on working at Stop 12 Truck Stop eventually becoming its manager. During her lifetime she loved to travel. Erma’s passion was traveling with her husband Harold. Together they traveled across the U.S. and Canada. After her husband Harold passed, she continued to travel with her grandchildren and friends. She traveled to London and Paris with her granddaughter Cameron. Erma took a cross country “road trip” with her granddaughter Samantha and foreign exchange students so the girls could see the Grand Canyon. Erma’s last big trip was to Hawaii to see her grandchildren Shane and Jennifer stationed at Schofield Barracks on Oahu when she was 84.

Erma was an avid reader, and very lucky finding four leaf clover’s wherever she walked. She loved pets caring for numerous cats and dogs during her lifetime. She was a devoted mother and grandmother and cared for her great-grand children well into her 80’s nearly every day. She was their first best friend and a fun companion. She was a phone confidant, bookkeeper, scheduler, and taxi to the grand kids growing up. If there was something she could help with she was the first one there.

Along with her parents, she was preceded in death by her brothers; Frank and Walter Tieber, and the only man she ever loved her husband Harold. She is survived by her daughter and son-in-law Sandie and Ernie Newhouse. Her grandchildren Samantha, Kiaya and Luka Bensink, Captains Shane and Jennifer Houle United States Army, Cameron Houle and Tim Zornow, Jason, Courtney and Marcus Newhouse, Nicholas Newhouse, Adam Newhouse, Brenda, Jim and Bradley Fox and special family members Debbie, Casey and Greg Best. .

No prior visitation will be observed. All funeral services will be private. There will be a celebration of her life to be announced at a later date at the convenience of her family.

To leave a message of sympathy, light a memorial candle or for more information, log on to www.masonfuneral.com

To send flowers to the family or plant a tree in memory of Erma Leamer, please visit Tribute Store

A Celebration of Erma's life will be announced at a later date by her family.
Online Memory & Photo Sharing Event
Online Event
About this Event

Look inside to read what others have shared
Family and friends are coming together online to create a special keepsake. Every memory left on the online obituary will be automatically included in this book.
View Tribute Book
Share Your Memory of
Erma
Upload Your Memory View All Memories
Be the first to upload a memory!
Share A Memory
Send Flowers