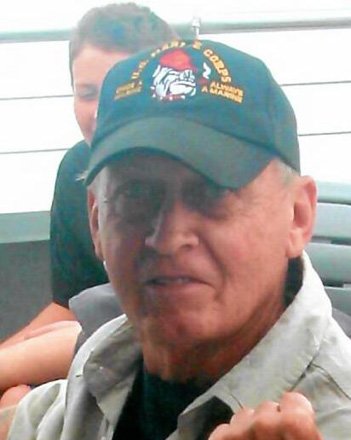 A Westfield resident all his life, Bob was a graduate of Westfield Academy and Central Schools and enlisted in the US Marine Corps in August of 1956 and proudly served his Country until his Honorable discharge in August of 1958, having attained the rank of Corporal.

Bob had been self employed as a Commercial Fisherman for many years aboard his boat, the "Sally Jo". He continued his love of fishing, and of the Great Lakes, well after retiring, as the owner and operator of the Westfield Fisheries, a Barcelona business now owned by his son, Kristopher.

Bob was a Life Member of the Wm. P. Jackway VFW Post 6764 of Westfield.  He was a member of, and Past Master of the former Summit Lodge #219 F & AM, as well as a member of the Jamestown Consistory, Order of the Scottish Rite.  Bob enjoyed the outdoors, the lakes, fishing and tinkering with his motorcycles and vintage cars. But mostly, Bob enjoyed spending time with his family and friends.

Survivors include his wife of 59 years, Violet, and their two children, Sally Switzer and her husband Scott and Kristopher Irwin and his wife Amanda, all of Westfield. Bob was the proud grandfather of Sara Tolbert, Jason Landon, Robert Landon, Daryl Irwin, and Tayler Irwin, as well as great grandfather of Kylee Tolbert, Cameron, Gracie and Noah Reinhart, Sophia, Nora and Finn Landon.  Bob is further survived by his brother, James (Kit) Irwin also of Westfield.

At Bob's request, no visitation will be observed. A Celebration of Life will be held at a future date to be announced by his family.

Memorial contributions may be made to the Westfield Stray Cat Rescue, 59 E. Main St., Westfield, NY 14787.

Funeral arrangements have been entrusted to the MASON Funeral Home, 37 Clinton Street, Westfield.  Log on to www.masonfuneral.com to send the Irwin family a message of sympathy, to light a Memorial Candle or for further information.

To send flowers to the family or plant a tree in memory of Robert Irwin, Jr., please visit Tribute Store