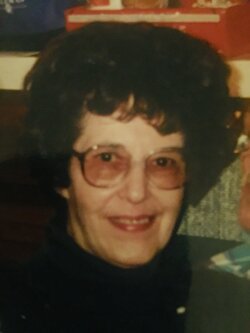 Please share a memory of Joanne to include in a keepsake book for family and friends.
View Tribute Book

great-grandmother passed away peacefully at her home on Friday, February 4th, 2022 surrounded by her beloved children.

Joanne Marie was born in Springville, New York on September 7, 1934 the daughter of late

Charlotte Wilhelmina (nee Witt) and Joseph Eilliam Nason. Joanne was one of

three children. She is predeceased by her brother Gerald (Rosemary)

Nason and survived by her sister Elizabeth (late Joseph) Milks.

Joanne was a loving wife of 62 years, to the late Robert “BoB” Smith. She leaves

Blain, and a son, Maurice “Zeb” (Kelly) Smith. She was a proud grandmother to

Jeremy Zanghi, Katelyn and Jared Smith, Zachary, Lucas and Hanna Blain. She was

a great-grandmother to Katya and Trenton Smith- Worden. She was loved by many

Joanne was a very successful businesswoman. As the owner of Joanne’s Beauty

Shoppe, she had many clients in the Springville and Hamburg areas. Upon moving

She worked there until her retirement.

If you knew Joanne, you would know there was no lack of talent. She was a

wonderful cook and at her table, there was an open invitation to fill your plate.

She could create new and fix the old with sewing and upholstering magic. No job

too big or small.

when she would find something extra special. Her green thumb was the envy of

many as she grew the most beautiful geraniums that appeared year after year.

Joanne lived a full life and will be truly missed.

A Celebration of Joanne’s life and a graveside service will be held in the spring. Arrangements

To send flowers to the family or plant a tree in memory of Joanne Smith, please visit Tribute Store
Online Memory & Photo Sharing Event
Online Event
About this Event

Look inside to read what others have shared
Family and friends are coming together online to create a special keepsake. Every memory left on the online obituary will be automatically included in this book.
View Tribute Book
Services for Joanne Smith
There are no events scheduled. You can still show your support by sending flowers directly to the family, or planting a memorial tree in memory of Joanne Smith.
Visit the Tribute Store
Share A Memory
Send Flowers