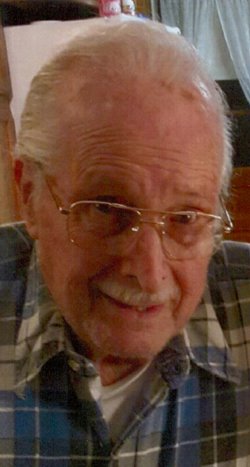 Bob was born in North Tonawanda, NY on September 7, 1927, the son of late Herman and Lucille

Bob was one of five children. In addition to his parents, he was preceded in death by his brother Richard

and his sister Deloris and survived by a brother David and sister Nancy.

Bob was a loving husband to his wife of 62 years, Joanne Marie (Nason) Smith. Surviving daughters;

Smith. He was loved by many nieces and nephews.

Bob left high school before graduating to join the Air force for WWII, at the age of 19. He was a radar

technician overseeing twenty -seven villages in Paris. When his tour was finished, he re-enlisted in the

Navy and served on the USS Tarawa; Aircraft carrier CVA-40 (Korean Conflict Designation) where he

When returning to the states he started his career as a Butcher. He was part owner of Super Duper in

Westfield. He was a member of UFCW Local One (Buffalo, NY).

Bob built his home in Forest Park. He served as president of Forest Park for many years. He was actively

involved in the creation of Forest Park/Edgewater (Town of Westfield, NY) Water and Sewer District.

He was a member of the American Legion, Westfield 327. He enjoyed boating on Lake Erie, walleye and

perch fishing. He also enjoyed watching the Buffalo Bills. When the opportunity arose, he loved

compassion that they gave to Bob.

The family is planning a graveside memorial service of life in the spring.