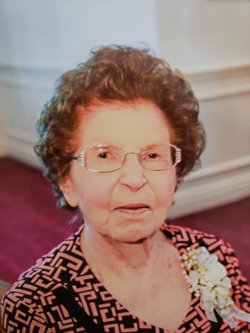 Please share a memory of Mamie to include in a keepsake book for family and friends.
View Tribute Book

Mamie M. Criscione, 100, passed away on Friday, January 29, 2021, at the Chautauqua County Nursing and Rehab Center, Dunkirk, NY. She was born on April 5, 1920, in Portland, NY, the daughter of the late Charles (Cruciano) Milonzi and Benedetta (Manzella) Milonzi.

Mamie began working as a sales clerk at Miller’s Drug Store from 1953*-1955, When the pharmacy changes hands to Gunnard Carlson. After Gunnard’s death, the pharmacy became a gift shop owned by Gunnard’s daughter, Linda Dunn. Her career spanned 50 years.

Mamie was well-known for her baking, especially for her cuccidati cookies, for which she passed along her “secret” recipe to her daughter, Joanne. However, her greatest loves, and to her, her most precious accomplishments, were her children, grandchildren and great-grandchildren. She was so proud of all that they had achieved and the wonderful people they had become. She left them all with fond memories they will never forget.

Due to COVID-19 restriction and protocols services will be private. Memorial contributions may be made in Mamie’s honor to St. Jude’s Children’s Hospital.