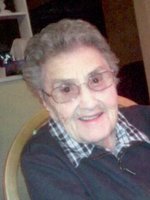 A Chautauqua County resident most of her life, having moved here from Erie, Pa., Anna and her late husband, Joseph ran a dairy farm in Portland, N.Y., on Barnes Road for many years. They then operated a fruit and vegetable farm on Onthank Road also in Portland for several more years. Anna was a dedicated homemaker and an awesome cook.

A private service arranged by the Mason Funeral Home, 37 Clinton St. Westfield, N.Y., was held by the family. Interment was in the Portland Evergreen Cemetery.