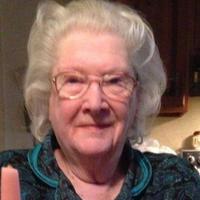 WESTFIELD - June Roberta Reed, age 93, of Academy St., Westfield, died Monday, November 2, 2015 at St. Vincent Health Center of Erie, PA. June was born on January 29, 1922 in Flemington, PA, a daughter of the late Grover Cleveland and Blanche (Tate) Hanna. June had been employed as a civilian Administrative Assistant in the US Army Air Corps and also as the Assistant to the President of the former Edinboro College in Pennsylvania. A Westfield resident since 1949, June had been employed in the Accounting Office of the Late Alan Kolpien, CPA, until the mid 1960's. She was involved with Girl Scouting and was a troop leader for several years. She enjoyed Arts and Crafts and was an accomplished knitter and enjoyed crocheting. She liked to fish on Chautauqua Lake with her sisters and loved the outdoors. Many days were filled with tending to her varied flower garden. June enjoyed Bird Watching and liked feeding the Geese at the Daniel Reid Pier in Barcelona. She greatly enjoyed spending time with her family and keeping her home. Mrs. Reed was a member of The First Presbyterian Church and Society of Westfield, where she had been active with the Church's annual Christmas Bizarre along with several other Church activities. She is survived by her daughter: Suzette H. Licht of Westfield, her two grandchildren, Donald "Joey" Licht and his wife Ann, also of Westfield, and Jennie Rebecca French of Penfield, NY. She is further survived by her two great grandchildren; Abbey A. Licht and Joseph Edward Licht. She was preceded in death by her husband of 71 years, Edward H. Reed, whom she married on September 12, 1941 in Lockhaven, PA and who died on March 15, 2012, as well as by her 3 sisters, Sara Irwin, Ida Marks, and Helen Smith and by her only brother, Ner T. Hanna. No calling hours will be observed. Friends are invited to attend the Funeral Services at 11:00 am on Saturday, November 7, 2015 at The First Presbyterian Church and Society of Westfield, 49 So. Portage St., Westfield, NY, with the Rev. Dana Vaughn officiating. Burial will be in Westfield Cemetery. Memorials may be made to The First Presbyterian Church and Society of Westfield, 49 So. Portage St., Westfield, NY 14787. Funeral arrangements have been entrusted to the MASON Funeral Home, 37 Clinton St., Westfield, NY. Log on to www.masonfuneral.com to send the Reed family a message of sympathy, to light a Memorial Candle or for further information.